The new Race Line LIGHT is a unique rental product created by OK1 Karts, characterised by components and driving sensations that derive from the racing chassis, while maintaining the highest safety and functionality standards.

The innovations include the design, which is inspired by the official racing team’s karts, and various technical solutions to guarantee utmost comfort both for the driver and the owner as well as reduced operating costs. Furthermore, lightness is another distinctive feature of this new rental product, which is also offered in a fully electric version that is ideal for indoor tracks. Let’s bring to light its characteristics. 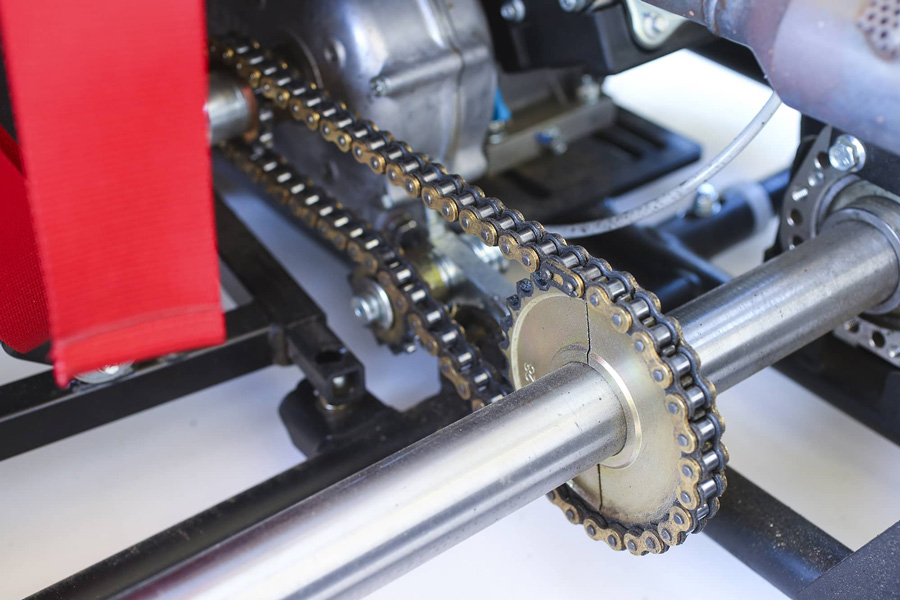 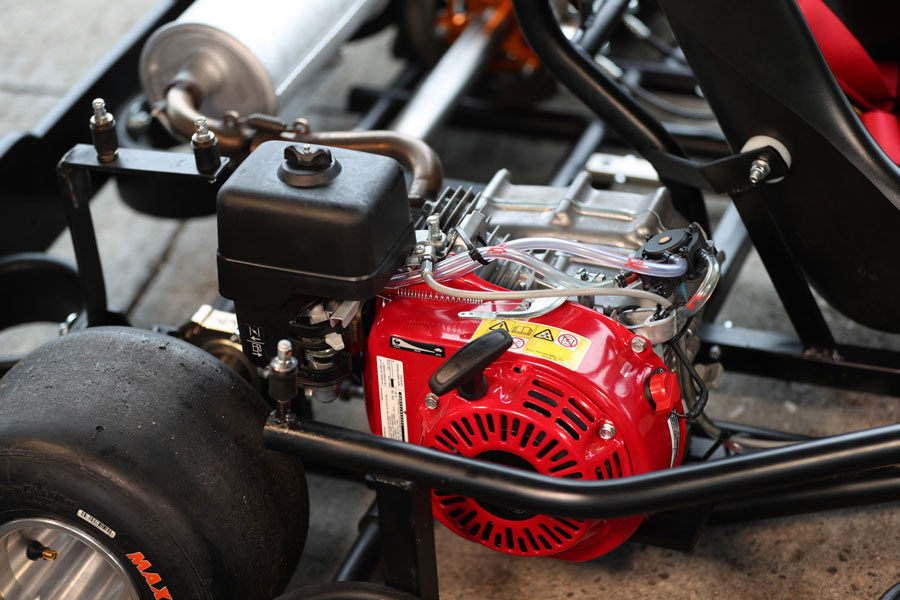 Thanks to a chassis that is built according to the principles of racing karts, the OK1 Race Line LIGHT only weighs 120 kg in its petrol version, powered by a 4-stroke engine. Following the specialised work of the IPK technicians, extreme lightness doesn’t prevent good sturdiness. In fact, the chassis, which is composed of 32 mm tubes and manually welded by expert IPKarting operators, is optimally reinforced in the areas that withstand the greatest stress, such as the fastening point of the C stub axle casings as well as the welds between the side longerons and the front tube of the chassis. With a weight of only 17 kg, the Tillotson 350 engine, the model selected by IPK for the petrol version, significantly contributes to the lightness of the kart and to making it a top-class product. 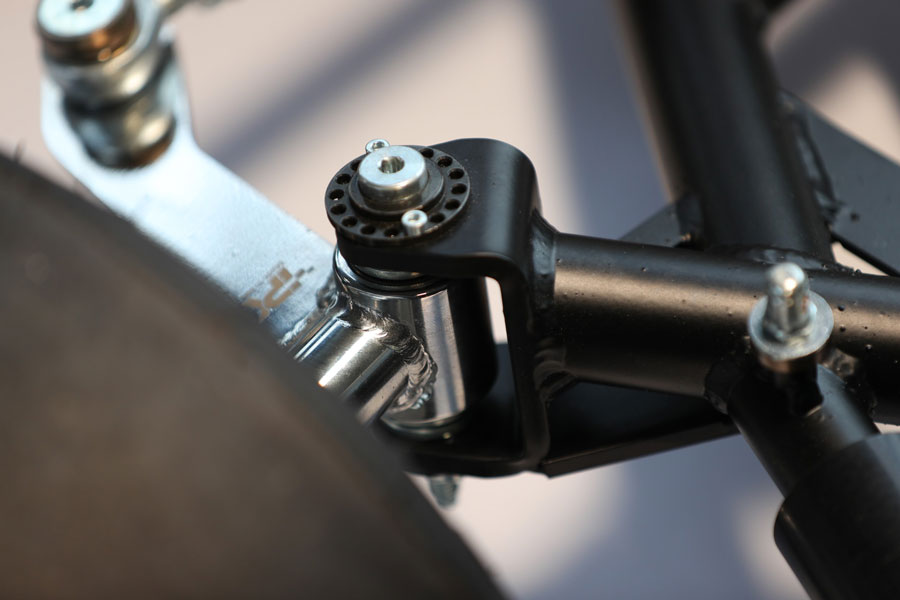 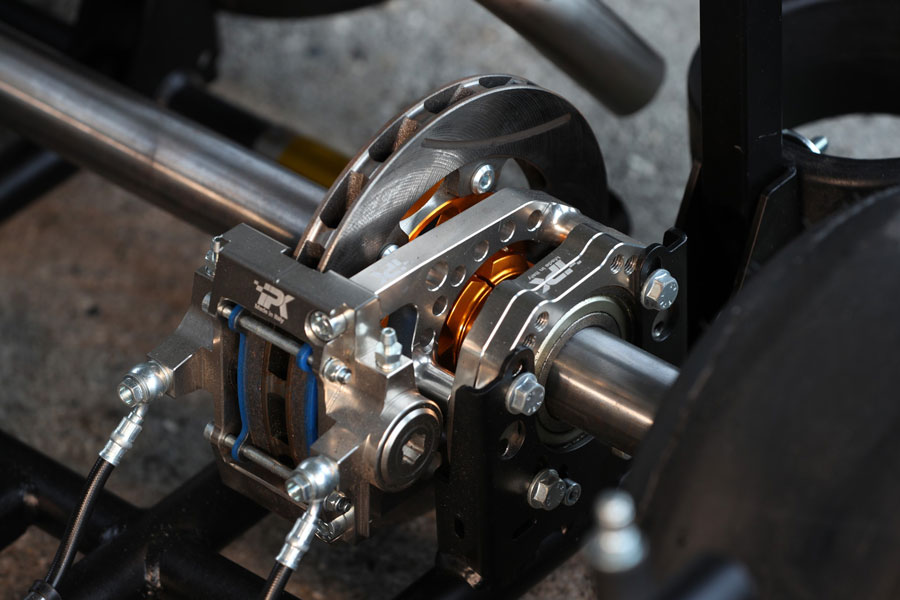 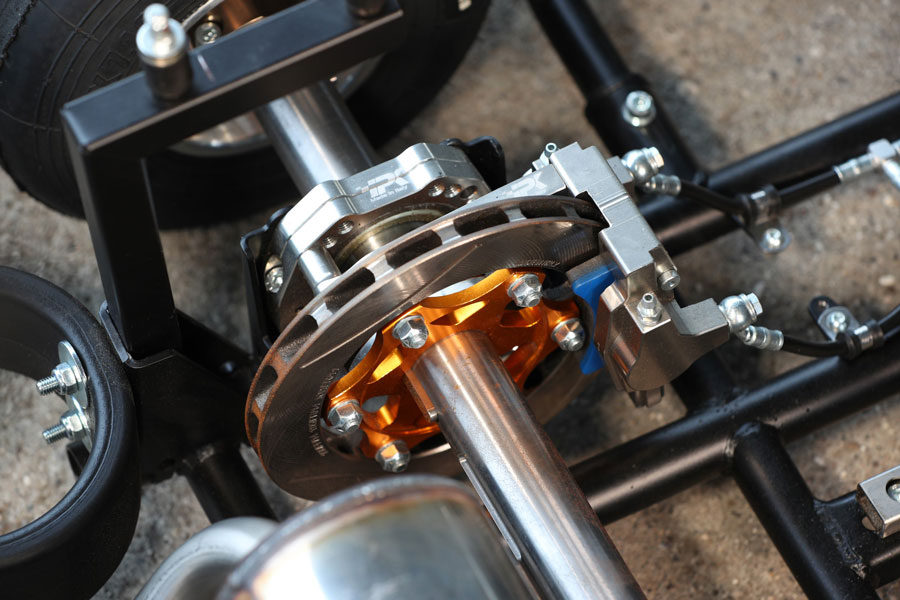 The emotions that a user can feel while driving the OK1 Race Line LIGHT are unmatched in rental karting. The racing DNA of this rental kart is expressed by high-quality components, which include accessories that, coherently with IPKarting’s manufacturing philosophy, are accurately machined from a solid block of metal. An emblematic example is the rear brake, which features an aluminium one-piece caliper with radial mounting and two pistons as well as a ventilated and non-floating 195 mm disc, characterised by grooves on the faces in order to guarantee uniform pad wear. As further proof to the link with racing karts, the Race Line LIGHT also offers the possibility of adjusting the front geometries through the ring nuts mounted on the Cs. The chassis’ height can be modified too, by appropriately positioning the spacers above and below the stub axles as well as by using the screws on the rear bearing housings.
Finally, thanks to a 300 mm steering wheel mounted on an inclined hub, just like on racing karts, and a unique lightness for a rental kart, the driving experience isn’t excessively tiring. 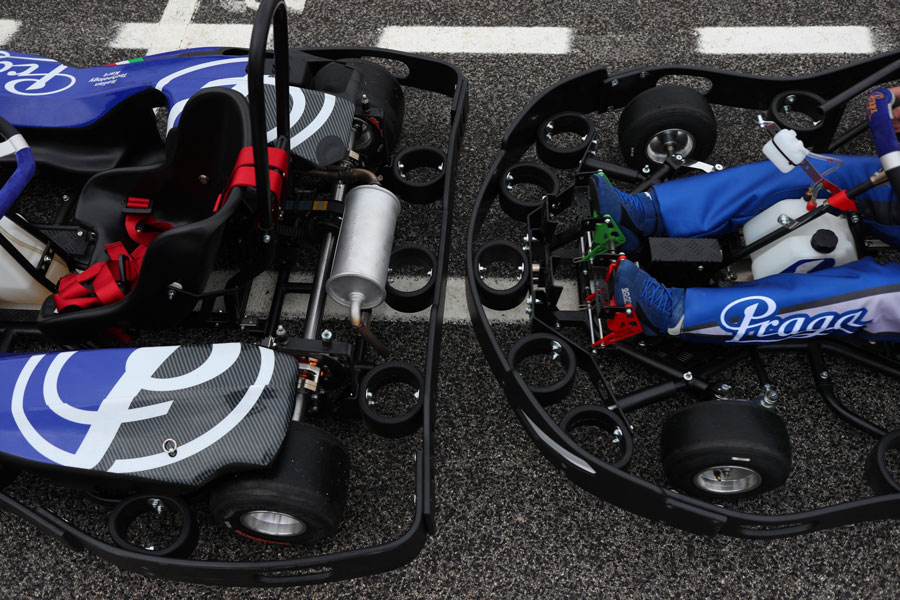 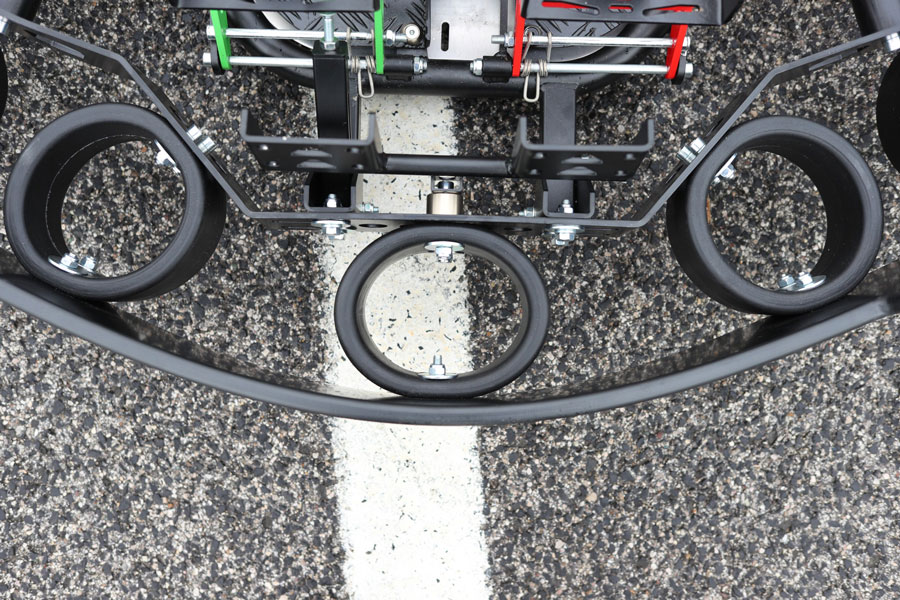 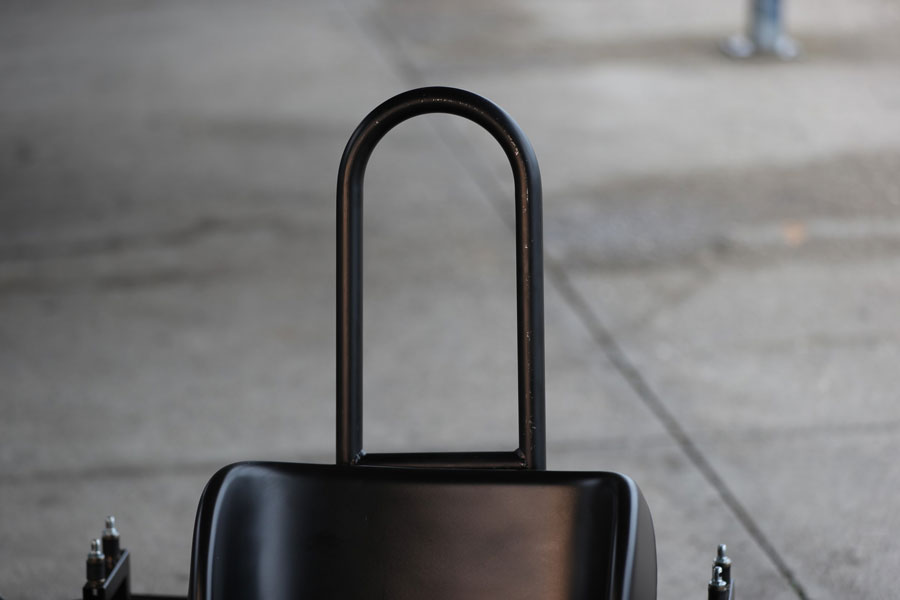 With the aim of ensuring the highest safety standards, IPK designed an outer fairing that entirely surrounds the OK1 Race Line LIGHT as well as curved inserts between the fairing and the chassis. In order to protect drivers in case of violent impacts, the IPKarting technicians also developed a tailor-made shock absorption system, mounted on the front of the kart and composed of a 32 mm tubular structure. This technical solution is positioned in front of the pedals and features springs that are functional for an optimal dissipation of the impact’s energy. The safety compartment is also enriched by an optional roll-bar, which is equipped with a quick-release safety belt system, approved for cars too, and offers total protection in case of a collision or roll-over. 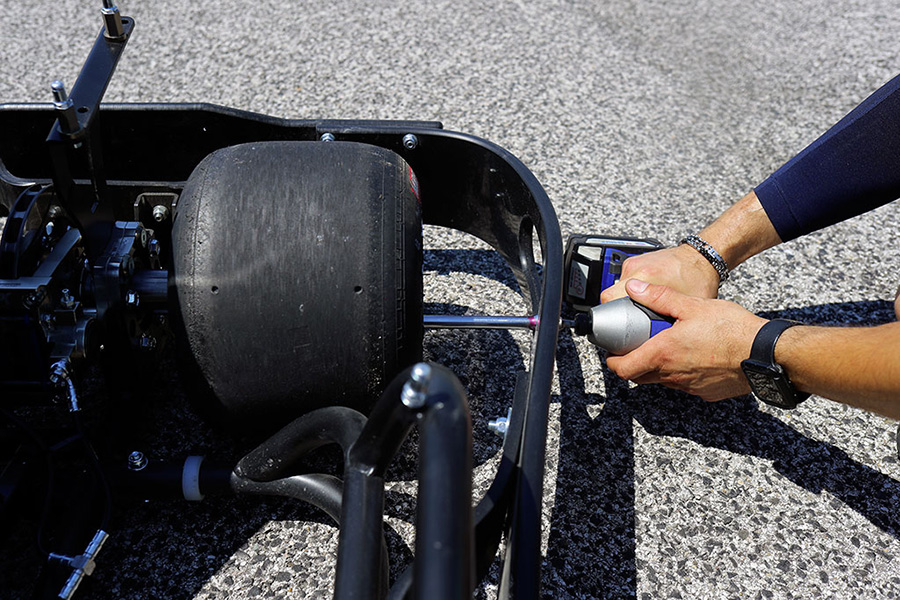 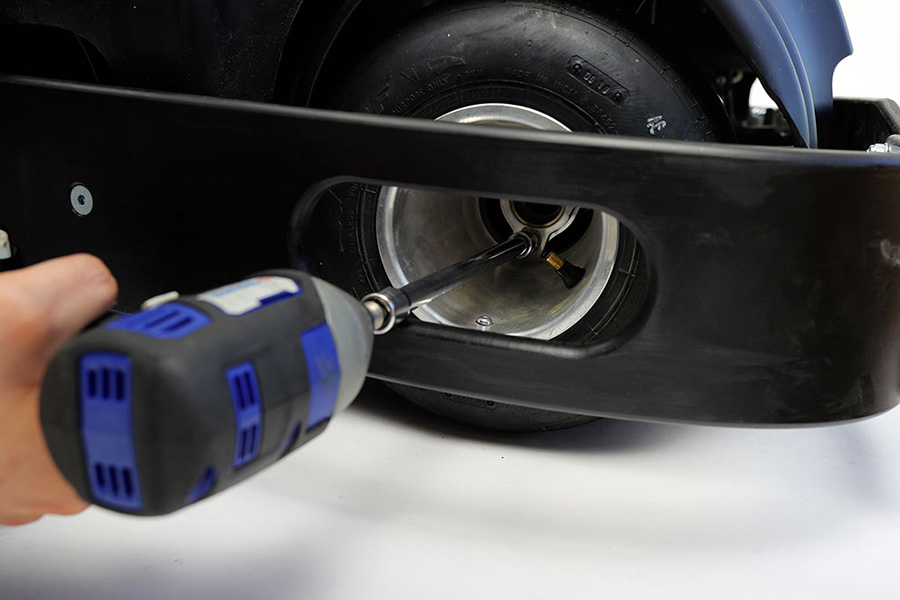 The exceptionally low weight of the OK1 Race Line LIGHT is also extremely beneficial to managers of rental kart facilities, as it contributes to reducing tyre wear, fuel consumption and related operating costs. Furthermore, the longevity of this rental kart and of its components has been improved thanks to various solutions, such as the cut-off system that stops drivers from accelerating and braking at the same time, thus maintaining the integrity of the engine as well as of the braking system.
The IPKarting technicians also achieved the goal of facilitating maintenance operations, as the openings found on the outer fairing enable the replacement of tyres without having to disassemble any other part of the kart. Moreover, the cover that prevents drivers from touching moving parts, which consists of only three pieces, can be removed and then put back in place in just a few simple steps thanks to 9 practical quick-release clips. 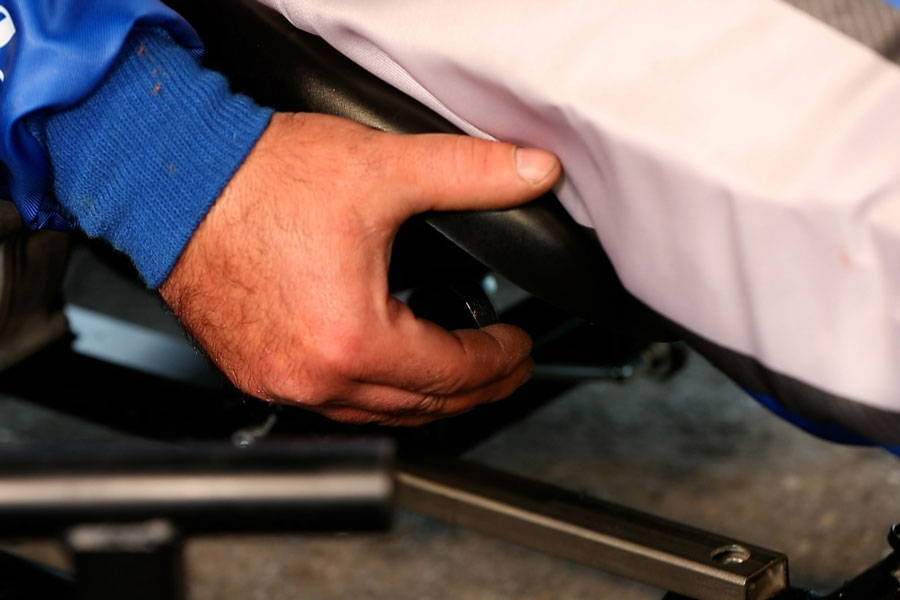 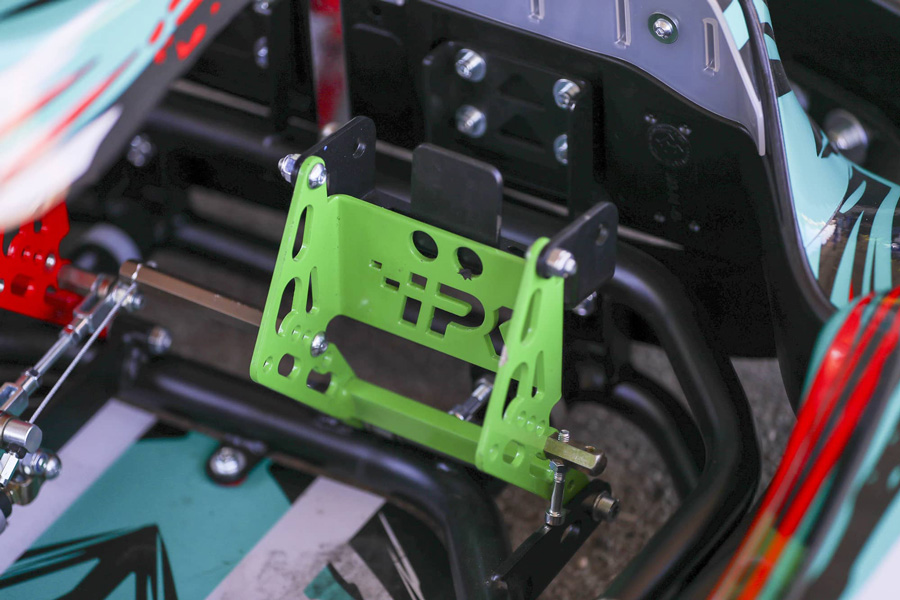 In the rental market, an essential characteristic of a product is its adaptability to the needs of all customers. Being fully aware of this aspect, IPK installed an adjustable seat on the OK1 Race Line LIGHT: mounted on two rails, with the possibility of sliding 8 cm back and forth by using a simple lever that is positioned on the left side. Additionally, the pedals, which have been studied to prevent the feet from unintentionally moving away from the ideal position, are equipped with a component that can be rotated in order to make them move 5 cm closer or further away.

THE ELECTRIC VERSION
The OK1 Race Line LIGHT is a state-of-the-art product in its electric version too, which is the ideal choice for indoor facilities or for those who want to avoid exhaust gases as well as noise. With its engine and battery pack, this rental kart weighs only 145 kg and still provides the emotional driving experience provided by the petrol model. With regard to autonomy, the battery lasts for two full hours and can be easily recharged without having to be removed from the chassis. Finally, another benefit of the Race Line LIGHT Electric is its versatility, as the engine performance can be modulated by the track operators through mapping in order to adapt to the driver’s abilities as well as to the circuit’s characteristics.

This website uses cookies to improve your experience while you navigate through the website. Out of these cookies, the cookies that are categorized as necessary are stored on your browser as they are essential for the working of basic functionalities of the website. We also use third-party cookies that help us analyze and understand how you use this website. These cookies will be stored in your browser only with your consent. You also have the option to opt-out of these cookies. But opting out of some of these cookies may have an effect on your browsing experience.
Necessary Always Enabled
Necessary cookies are absolutely essential for the website to function properly. This category only includes cookies that ensures basic functionalities and security features of the website. These cookies do not store any personal information.
Non-necessary
Any cookies that may not be particularly necessary for the website to function and is used specifically to collect user personal data via analytics, ads, other embedded contents are termed as non-necessary cookies. It is mandatory to procure user consent prior to running these cookies on your website.
SAVE & ACCEPT